Aquarq is the primary objective in the point extraction gamemode. Either 7 or 10 must be collected in order to complete the mission. Similarly to other gems such as Bittergem, Jadiz or Enor Pearls, they must be carried to the M.U.L.E, or in this case, the Minehead.

Aquarq is a large object and must be picked up and carried by hand. When carrying a large object, a dwarf cannot do anything but throw flares and grenades, ride ziplines, and movement speed is penalised by 25%. It can be dropped by switching weapons, or thrown by pressing the primary fire key. 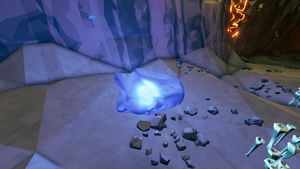 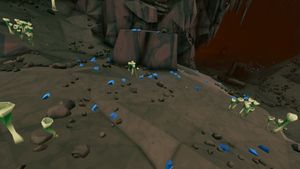 the blue crystals marking its location

Aquarq is a large glowing blue chunk of crystal.

The area that the crystal is buried in is dotted by small sky-blue crystals and a dim blue glow, similar to other resources hidden within the walls. Small crystals only shine when there is Aquarq nearby.

Aquarqs can be found in any Planetary Regions, however they are exclusive to the Point Extraction game mode.