The M.U.L.E., or the Mining Utility Lift Engine is a quadrupedal robot capable of walking on any surface, acting as a mobile depository for the resources gathered by the team. 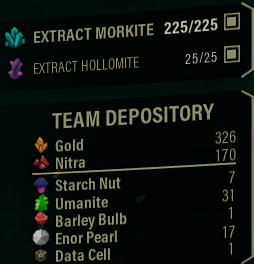 An image of the team depository. Resources that have completed their quota have a checkmark ( ✓ ) next to their icon and name.
The M.U.L.E making it's robotic beeping sound when called

The M.U.L.E acts as a team inventory and stores all materials collected; such as Gold, Morkite and Nitra, as well as hidden gems like Jadiz or Bittergem.

By default, it can be called by using "C" on a Keyboard or "Y" on a Xbox One controller to the player's current position. Calling the M.U.L.E. places a marker on the ground where it will stop. It will take the most direct path towards the set position, walking on any solid surface, including walls and ceilings.

As soon as the primary mission goal has been reached, the Drop Pod can be called using a red button that appears on the back of the M.U.L.E. Once pressed, the Drop Pod will land at a distant location and the M.U.L.E will begin walking towards it, ignoring any calls from that point onward.

The M.U.L.E will leave behind a glowing trail of green markers that look similar to the ones the Dwarves place when calling it to their position. The markers will pulse with light in sequence starting with the first marker placed to the most recently placed marker, as it travels towards the Drop Pod during the extraction phase.

Mini M.U.L.Es make an appearance in the Space Rig and are the objective during Salvage Operation. When repaired during a Salvage mission, they will follow the M.U.L.E, but they do not function like the M.U.L.E. and cannot be used to store minerals.

Whilst on a Mission, the Dwarves call for the M.U.L.E. using nicknames, such as 'Donkey', 'Walking Tin Can', 'Molly'[1] and the 'Minecart on legs'.

Deep Rock Galactic does not approve of this behavior and informs all employees about this using the following PSA (visible on the DRG Information Channel in Space Rig 17):

PSA: The M.U.L.E. units are neither sentient, nor pets. Calling them "Molly" will not impact the MULE unit's programming.