Mission Control is the Deep Rock Galactic corporate representative who oversees the employees of Deep Rock Galactic as they go about their business, either on the Space Rig or in Missions. He is responsible for a variety of intelligence-related tasks to keep players aware of any needed information, such as informing players about their objectives during a mission, or of an incoming swarm.

Mission Control has the job of providing information to the Dwarves while they are exploring the caves of Hoxxes IV. This includes a variety of tasks such as alerting the dwarves about incoming swarms of enemy creatures, launching Supply Pods, and handling extractions. For missions involving the M.U.L.E., he will only activate the button to call in a Drop Pod once the primary objective has been achieved.

When a swarm is imminent he will announce it to all Dwarves, with approximately fifteen seconds before the swarm arrives to give players preparation time. He will also identify what type of swarm type it is if applicable. When the majority of a swarm has been cleared, he will notify the dwarves that no further enemies are incoming.

He is particularly involved during Salvage Operation missions, directing the dwarves on how to repair the Drop Pod and chastising them if nobody is present in the activation radii of the Uplink or Fuel Cells.

Not much is known about Mission Control, despite his presence throughout the game. As such, most of what can be discerned about him is speculation. He has a different voice actor to the other Dwarves with a sophisticated Danish accent, in stark comparison to the often crass and unpleasant Dwarves. This suggests he is not a dwarf himself and likely a human (also owing to his lack of a beard) though his race remains unconfirmed. He holds a high-level position within Deep Rock Galactic, as he frequently mentions being in contact with Management to discuss affairs such as promoting a Dwarf.

Mission Control often expresses frustration with the Dwarves when they abuse company property, such as kicking barrels into the Space Rig's launch bay. He can be cold or dismissive at times, often looking down upon newly recruited Dwarves, though he shows admiration for those who devote themselves to Deep Rock Galactic, especially Dwarves being promoted.

He is also implied to have some combat experience as he remarks on the weapons acquired from completing Weapon License assignments. He seems to be fond of the M1000 Classic, though he expresses bemusement at some of the more technologically advanced weapons such as the Cryo Cannon or Experimental Plasma Charger. He advises caution with heavier weapons such as the Heavy Autocannon.

The Dwarves themselves seem to be generally dismissive of Mission Control, mocking him for having a "cozy job" while they are stuck in the depths of the caves.

Based off of the description for the achievement "Foreign Objects In The Launch Bay", it is implied that Mission Control drinks due to the stress of dealing with dwarven antics. 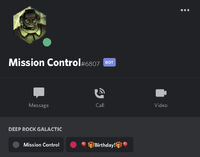