Nitra is a common mineral resource, available in every Planetary Region and Mission Type. Once at least 80 Nitra is collected in the teams depository, a Resupply Pod can be requested. The Resupply Pod has four resupplying racks, one on each side. Each rack will refill Half of any Dwarves ammunition, fuel, grenades, and health when used. Note that there is no difference between used and non-used Nitra. You will not receive any bonus if you save Nitra till the end of the mission. 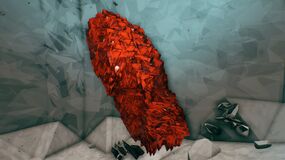 Nitra is a deep crimson-red ore, spread across the walls of the caverns. Unlike most other ores, it bulges out of the walls prominently. Nitra can be seen glowing in the darkness, however it does not glow as brightly as other resources such as Morkite.

As a fundamental resource mineral, Nitra can be found in any environment and mission type. It typically spawns up on the walls and sometimes on ceilings of larger caves, making it difficult to reach. Use your Reinforced Power Drills, Zipline Launcher, Grappling Hook, or Platform Gun to reach these Nitra deposits. In tighter caves, Nitra will typically spawn within reach from the floor of the cave. In Magma Core, Nitra has a higher chance to spawn high on the ceiling due to the ribbed ceiling structure found in many larger Magma Core caves.