Red Sugar is a glowing, deep red crystalline resource which can be found in every biome and game mode. Upon being mined, rather than being placed in the player's inventory, it will immediately restore any missing health to Dwarves by up to a maximum of sixty points. Generally speaking, one full vein of Red Sugar will restore a typical Dwarf's health by half. If a Dwarf with full health digs Red Sugar it will fall to the floor and can then be picked up by an injured Dwarf; the Dwarf who tried to mine it will also be notified their health is full with a popup on the HUD. Since Red Sugar cannot be added to the player's inventory, it is impossible to deposit and can never be sent home to the Space Rig; it is a purely temporary consumable. 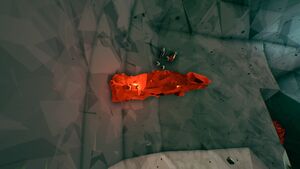 Although Red Sugar is somewhat common, it can sometimes be a difficult task to get to it as it usually spawns on walls or ceilings of caves, out of standard mining reach. Classes such as the Scout and Engineer should work together to break veins of Red Sugar off of the walls for other Dwarves to reach. Mining Red Sugar with full HP ahead of time allows it to be instantly collected when needed, which can potentially be lifesaving.

The amount of healing provided by Red Sugar can be increased with the Sweet Tooth perk. At its highest level it increases healing received by 20%, providing a max of 72HP from one vein - it also provides a 20% temporary speed bonus after collecting. Collecting Red Sugar while in Iron Will status will prevent the player from going down and will take the player out of Iron Will status.