From Deep Rock Galactic Wiki
Jump to: navigation, search
This article may need cleanup to meet quality standards.
Please help improve this if you can. The Discussion page may contain suggestions.

Ores are a type of mineable resource in Deep Rock Galactic. There are numerous different Ores scattered across the caverns of Hoxxes IV, some of which are required to unlock upgrades, while others are mission-related.

These resources are required to complete primary and/or secondary objectives. They are not added to your gathered resources at the end of a mission, unlike the crafting resources below.

These items are required in order to finish the current mission.

Alien Eggs are mysterious, yellow eggs with pink, veiny ridges found in walls, similar to large resources such as Aquarq. They are marked by pulsating red/purple orbs and organic "tubes" on the wall. They must be found and deposited in order to complete the primary objective during Egg Hunt mission types. Depending on the length of the mission, the team will have to collect 4, 6 or 8 eggs in total to complete the primary objective. Alien eggs are always found embedded within dull, fleshy Organic Material and appear as yellowish spheroids on the Terrain Scanner.

Encountered solely in Point Extraction as the primary objective, Aquarq takes the form of large blue crystals embedded in the rock. It can be located via smaller blue crystal formations on the surface, as well as a faint blue glow if they're near the surface.

A dark cyan-blue mineral found in wall surface veins, Morkite is the primary Mining Expedition objective, and only appears during these missions. The party will typically have to mine between 200 and 400 Morkite, depending on mission length and complexity. Once the quota has been filled, the M.U.L.E. will enable the recall function. 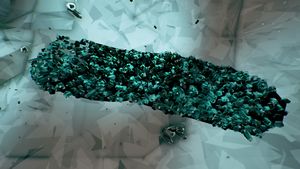 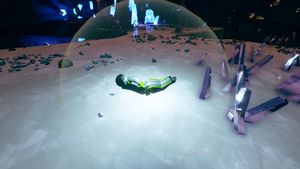 These are not mission-critical, but will give a nice credit and XP bonus if collected before the end of the mission.

A blue-tinted metallic mineral found in wall surface veins, Dystrum is a secondary objective resource exclusive to Point Extraction missions. It is not as bright as other minerals when light shines on it, so you may have to make a few passes to find it all. 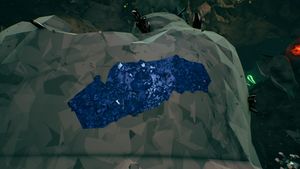 A fossil of an Ammonite that can be picked up from the wall. The secondary objective will usually require 10 of these to be collected. 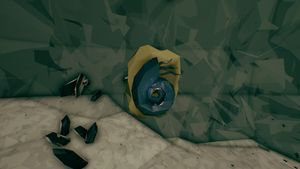 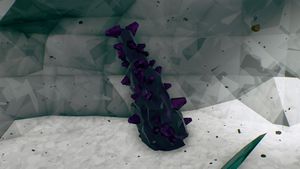 Apoca Blooms are a secondary mission objective. They grow on the walls and floors of caves and tunnels, and must be collected to complete the secondary objective. Their petals are bioluminescent and can be seen in the darkness, making them easy to see at a distance. 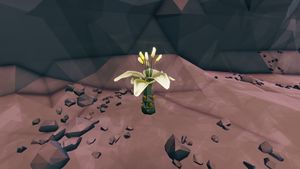 Boolo Caps are a secondary mission objective. They grow on the walls and floors of caves and tunnels, and must be collected to complete the secondary objective. Their purple caps are bioluminescent and can be seen in the darkness, making them easy to see at a distance. 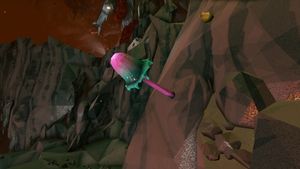 These resources are not required for mission objectives, but are required to craft upgrades and cosmetics. As such, it's generally worth gathering them whenever they're discovered. They are permanently added to your inventory when the mission completes.

Bismor is found as large yellowish cubes with dark brown nodules dotting on each six faces. It is always located on the floor of caverns, making it an easy mineral to find and mine.

Croppa is a pale green metallic ore adorned with small purple spikes. It is found in surface deposits much like Morkite and Gold, although it slightly juts out of the walls and may spawn higher up than other crafting minerals.

Enor Pearls are glowing white pearls only available as large spheroids embedded into the terrain. They can be located by the clusters of smaller pearls on the surface nearby.

Jadiz is found as large green crystals embedded into the rock, and can be identified by the smaller green crystal clusters on the surface around it.

Found as reddish mineral clusters with grey-black protrusions that look a little like metal bolts, Magnite is a rare crafting resource located in some of the most hostile regions of Hoxxes.

Taking the form of bright green mineral clusters, Umanite is found jutting out of the floors of caverns and tunnels, much like Hollomite.

Hops are used for crafting beers in the Abyss Bar. Each plant can appear with one to four branches with a product, with the exception of the Barley Bulb which always only has one bulb.

Barley Bulb is an ingredient used to create Today's Special drinks or acquire Beer Licenses in the Abyss Bar.

Malt Star is an ingredient used to create Craftable drinks or acquire Beer Licenses in the Abyss Bar.

Starch Nut is an ingredient used to create Craftable drinks or acquire Beer Licenses in the Abyss Bar. It is the most common beer ingredient.

Yeast Cone is an ingredient used to create Craftable drinks or acquire Beer Licenses in the Abyss Bar. It is fairly rare.

These resources are not essential to mission completion, but are nevertheless important to gameplay. They do not carry over between missions, and are converted into gold and/or XP at the end of the mission.

A brilliant magenta mineral only available as massive chunks embedded into the terrain, Bittergem can be found by looking for clusters of magenta crystals on the surfaces nearby. Once extracted, the chunk can be deposited into the M.U.L.E. and will be worth a very healthy amount of credits at the end of the mission.

It is quite rare, only spawning with a 1/21 chance.

A lustrous metal found in wall surface veins and embedded into the terrain as massive chunks, Gold's primary function is to provide a boost to credits earned when extracted. Wall veins are usually easy to spot, but massive chunks can be found embedded into the rock. Look for flakes of gold on the walls and floor to find them. Each chunk is worth 150-250 units of gold.

Gold chunks have a 1/3 chance to spawn. 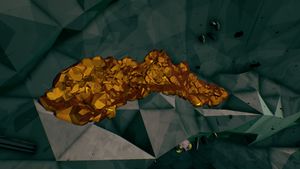 A bright red mineral found in wall surface veins, Nitra is used to call in resupply pods. It costs 80 Nitra per pod, and each resupply pod has four supply racks, each restoring 50% health and ammo to the user by default. 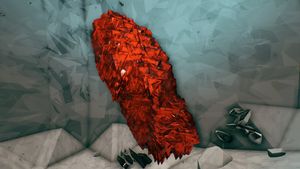 Red Sugar takes the form of bright red crystal and glowing formations scattered throughout the caves. It's vital to your survival, as Red Sugar is the only way to recover lost health besides calling for a Supply Pod (which costs Nitra) or using the Vampire perk. 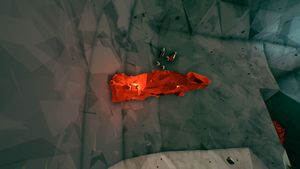 A strange black Rubik's cube-esque object with pulsating white grooves. It is a very rare resource that is not listed on any biome, and its uses are currently unknown. It has a 1/26 chance to appear.

This 'mineral' (though it might better be described as an artifact) can be located by the presence of bright gray and glowing spikes on the surrounding rock. These spikes seem to pulse with energy, though once the artifact has been removed from the deposit the spikes fade to dull, lifeless grey. When examined, the characters will comment on its bizarre nature and strange appearance.

Upon mission completion, the error cube will award 2000 experience.